The most Orthodox Prince St. Oleg of Bryansk. Guardian Angel 102.105 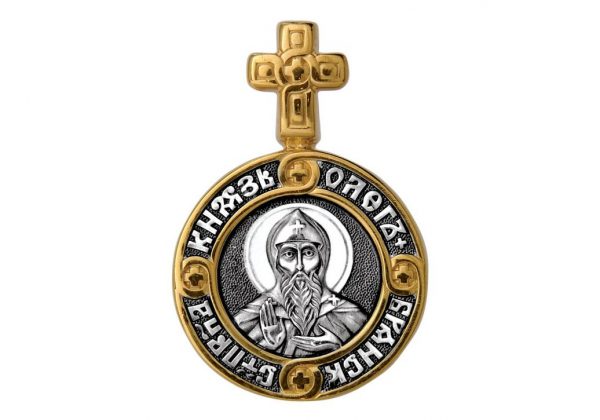 A small locket with the icon of the most orthodox Prince St. Oleg on the obverse, and an image of Guardian Angel on the reverse is round-shaped. Circle is the symbol of eternity, of Heaven and of God, the sign of God praised saints abiding with Him in eternity at Heaven.

Names of Prince Oleg father and grandfather take a noteworthy place in Russian menology. His grandfather Michael, Prince of Chernigov, was a protomartyr who suffered in the Golden Horde together with boyar Theodore († 1246) for refusing to carry out Tatar profane rites; his father, Prince Roman founded the Svena monastery of Bryansk, built in remembrance of miraculous healing of blindness. In piousness Oleg was not inferior to his glorious ancestors. Being the Prince of Bryansk and Chernigov princedoms Oleg perceived delights of power, wealth and military triumphs but realized all the vanity and caducity of such life. Giving the reins of government up to his brother, in 1274 he built Peter-and-Paul monastery on the Desna river bank and became a monk there.

The prince-coenobite was celebrated for uncommon austerity and self-sacrifice. He expired early in 14th century. The relics of the saint are kept in the monastery that he founded.

The most orthodox Prince Oleg is commemorated in the memorial day of his grandfather on October 3 (September 20).