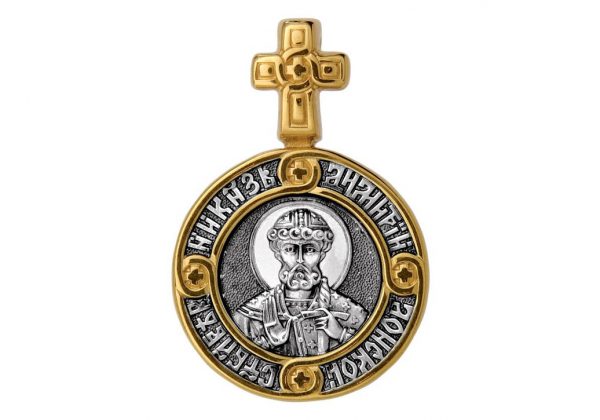 A small locket with the icon of the most orthodox Prince St. Demetrius on the obverse, and an image of Guardian Angel on the reverse is round-shaped. Circle is the symbol of eternity, of Heaven and of God, the sign of God praised saints abiding with Him in eternity at Heaven.

The most orthodox Prince St. Demetrius Donskoy was born to the family of Grand Prince John the Handsome in 1350 году. After his father death in 1359 Metropolitan Alexis († 1378) became  teacher and spiritual guide. The Holy Hierarch was one of the most educated persons of that time, a companion holding the same views as St. Sergius of Radonezh.

Being sixteen years old Prince Demetrius married princess Eudocia, the daughter of Prince of Suzdal, thereby putting an end to feuding between Moscow, Suzdal, and Tver.

St. Demetrius devoted all his life to struggle for consolidation of Russian land and it’s unyoking of the Mongol overlordship. He won many remarkable victories over the enemies but the battle with khan Mamay troops on the Kulikovo field in 1380 was his most glorious feat of arms. St. Sergius of Radonezh blessed the prince for this battle, and sent two monks, Peresvet and Oslyabya to his host. Legends about this battle royal tell that the Lord granted Russians the victory at the cost of great sacrifices for human sins. But He forgave them through the prayers of holy monks, and piety and purity of the most orthodox Prince St. Demetrius.

In affairs of both the state, and the family St. Demetrius never departed from evangelic laws. His spouse Eudocia had always been staunch helpmate and assistant. Incessant work troubles and battles undermined prince’s  health, and aged 39 he deceased in 1389. Eudocia remained a young widow with small children and continued society conduct of life, but wore fetters secretly under her rich garments. She dispensed all her personal wealth among the poor; she founded the Convent of the Ascension in Moscow and in Pereaslav. Before her death in 1407 she took the veil under the name of Euphrosyne.

The most Orthodox Prince St. Demetrius Donskoy is commemorated on June 2 (May 19 мая), his Venerable spouse being commemorated liturgically on July 20 (7).