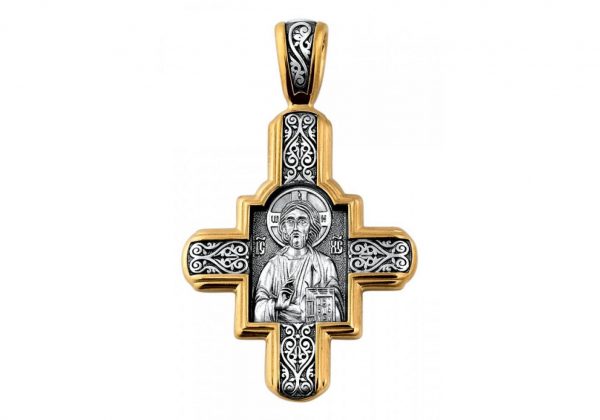 Next-to-skin cross with image of the Lord Almighty on the obverse and that of St. Panteleimon the Great Martyr and Healer on the reverse has traditional iconography and styling. The Lord’s portrayal with a book in His left hand the right one being raised in benedictive gesture is one of the most ancient images. On this icon He appears as the master of human destinies, the ruler and the judge of the entire Universe. The book in His hands symbolizes the Book of Life wherein all human deeds are written as well as names of those whom the Lord selected for futurity. But not everyone will enter the Kingdom of Heaven. According to Apostle John, woe betides those whose name is absent in it: God’s punishment will befall them. “Or don’t you know, – Apostle Paul says, – that the unrighteous will not inherit the Kingdom of God? Don’t be deceived. Neither the sexually immoral, nor idolaters, nor adulterers, nor male prostitutes, nor homosexuals, nor thieves, nor covetous, nor drunkards, nor slanderers, nor extortioners, will inherit the Kingdom of God” (1Cor. 6, 10).

But the Merciful Lord “has no pleasure in the death of the wicked; but that the wicked turn from his way and live”. (Ezek. 33;11). That is why the He visits them with sicknesses and misfortunes, in order to bring them to their senses or even to avoid a terrible sin. Sicknesses are a way of probations that the Lord leads us to salvation for futurity.

The direct connection of bodily sickness with that of soul is many a time spoken in Gospel. When healing a sick person, Christ first of all forgives him (her) a sin. Before doctoring a body with its diseases, He treats the soul with its sins. The body dependence on soul is evidenced of by hagiographies of many healers and wondermakers, the Gr. M. Panteleimon († 305) being among them.

The spiritual image of Russia, the history of the Orthodox Church are unimaginable without St. Panteleimon. But his name is known not only be the Orthodox. In ancient Nicomedia (Turkish Izmir, at present), where he had suffered, annual solemnities are performed on August 9, his commemoration day; and thousand of Armenians, Catholics, and Mahometans pray to the saint, the book “Kontakion” being written wherein people of different religious beliefs and ethnic origins note down with their own hands the stories of healing after repentant praying for the holy doctor. And having been healed many people are reborn for living in God.

St. Panteleimon, the Great Martyr and Healer was born in Nicomedia during the reign of Emperor Maximian (284-305) into the noble but heathen family, and named Pantaleon, which meant “like a lion”. While being trained in medical art by physician named Euphrosyn noted in Nicomedia, he got acquainted to St. Hermolaus, a Christian presbyter. The youth visited the holy person everyday, conversing with him for hours, and as a result he adopted Christianity with all his heart, particularly after miraculous healing that he managed to do in Christ’s name.

One day he saw a dead child bitten by a huge snake that was lying beside. Pantoleon started praying to the Lord Jesus Christ for the dead to be raised, and the venomous reptile to be killed. He was determined to get baptized in the event that his prayer was heard. The child returned to life, the snake dying. Pantoleon was baptized by St. Hermolaus, and became an unmercenary physician. In Christ’s name he healed everyone who asked for aid, free of charge. Perpetual mercy and heartfelt love of sufferers helped Pantoleon to work wonders of healing. He became famous. Sick persons wished being treated only by him, at that many of them were Christianized.

Out of envy physicians of Nicomedia squealed to the Emperor on his healing gratis in Christ’s name. The youth was caught and tormented, since Christianity had been a forbidden religion. He was torn by iron talons; scorched by burning candles; stretched out on a rack; thrown into boiling stannum, and into sea (with a stone on his neck).   But the martyr remained firm, his wounds being miraculously healed. Then he was condemned to being torn to pieces by wild beasts, as a magician. But the beasts in the circus lay down to his feet and started licking them in eager rivalry. The spectators jumped up shouting: “The Christian God is mighty!” Enraged Maximian ordered the warriors to put everyone glorifying Christ’s name to the sword, Panteleimon being decapitated.

But when the saint was fastened to an old olive tree and a warrior stroke him with a sword, the latter bent; and the voice sounded from the heaven calling for Pantaleon and naming him anew Panteleimon, that meant “all-merciful”. The warriors fell down to his feet and refused to execute him. But Panteleimon ordered them to do their duty. When his head was cut off, milk began to flow from the wound, the olive-tree fruiting. Nowadays the St. Panteleimon`s sanctified head in a special shrine is kept  in Russian monastery named after him in the Holy Mt. Athos.