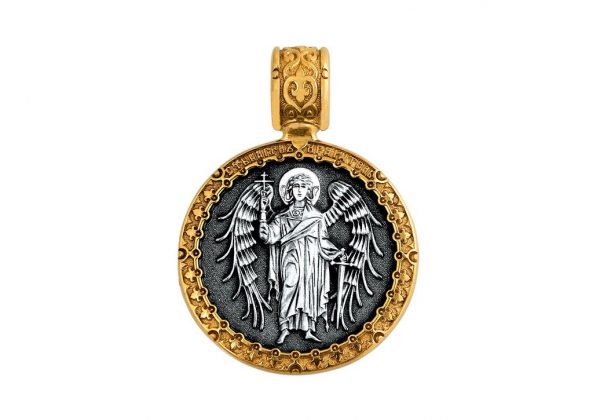 The obverse of the small icon shows the Guardian Angel enclosed into the ornamental pattern that symbolizes hearts blossomed with love for God. In his right hand the Angel has a cross — the sign of obedience to Christ and conformity to His commandments; his left hand squeezes a sword for repulsing demons that attack and try to catch human soul.

The Holy Scripture speaks of angels as of supreme rational beings who glorify God and fulfill His will. God endowed them with various abilities and put them in the Heavenly abodes. The word “angel” means messenger in Greek. Angels are God’s faithful votaries whom He sends to announce His commands.

Angels were created as well as human beings, but they have quite another nature. On the icons they are portrayed in human appearance with large wings. Their mighty wings symbolize the speed for fulfilling God’s commands, small ribbons around the Angel heads symbolizing their permanent hearing God voice.

There exists the infinite number of Angels, all of them making up harmonious Heavenly hierarchy. They are divided into nine realms that make up three choirs. The first rank includes seraphs, cherubs and the thrones; the second comprises the dominations, virtues and the powers; the third involves the principalities, Archangels and Angels. The Archangel Michael stands above all the nine ranks as God-appointed leader and superior.

Guardian Angels are of lower rank and closer to people. They protect everyone on Earth. They heave the abandoned, help the devout and never leave anybody of us in the course of our earthy life.

Everyone has a Guardian Angel of one’s own who is attached to him (her) when getting baptized, and remains beside invisibly. The Guardian Angelic ministry consists of not only guarding the person but to contribute to his (her) soul saving for futurity. Therefore the Guardian Angels evangelize one spiritually, set him (her) on the right path, and invoke God for him (her). It is the Guardian Angel who sees the soul to the eternity after the earthly decease of the human being.

The Guardian Angels take an active part in human destiny. As pure and holy creatures capable only of loving and administering works of mercy, the Guardian Angels do their best to serve for our good and salvation. Being our constant companion Guardian Angel not only edify us mysteriously for good and wholesome things according our wish, not only offers up his prayers to God; but protects us against visible and invisible enemies, and intercede for us with God on his own behalf.

Just like human beings the Guardian Angels are personalized creatures, but we are not allowed of their names to be known, as well as of the name of our personal Guardian Angel. That is why there is no special form of worship for the Guardian Angels either for all of them, or for everyone separately. But Church teaches that it is incumbent on us to revere and thank our Guardian Angel daily in prayers, to appeal to him for patronage and protection as to the nearest spiritual guide.

On the reverse there is an ornament looking like equilateral “Greek” cross that symbolizes the harmony of the four-parted world united in Christ.

In medieval West Europe such a cross was worshipped too, and widely used in symbolic ornamentation. It is seen in stained-glass windows and fretwork decoration of Gothic temples, on tapestries, on household utensils. It was associated with quadrifoliate clover that brought luck according to a popular belief. Three leaves of it considered to symbolize principal Christian virtues – faith, hope and charity (love), the being a symbol of luck so necessary for everyone.

The prayer words are written roundabout: “O Guardian Angel, increase my good motives, and teach me to strive for the peace of life”.