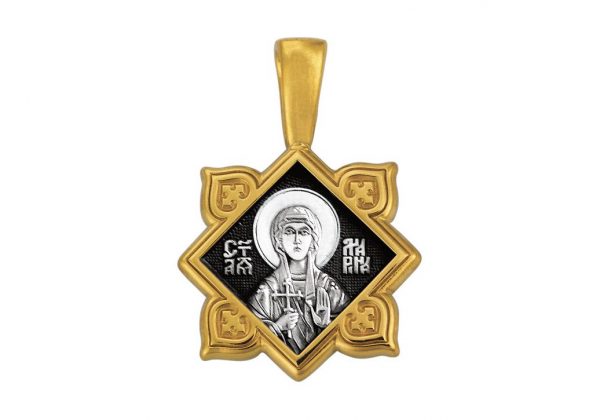 St. Marina, the Great Martyr was born in Antioch of Pisydia (in Asia Minor, present Turkey) into the family of a pagan priest. At her infancy she lost her mother, and father gave her in the charge of a wet-nurse. The woman was a Christian and told Marina of Christianity.

Marina lived at the time of severe persecutions of Christians, undertaken by emperor Diocletianus (284-305). Many of the Christians hid out in deserts and caves. They were found and subjected to the severest tortures and punishments. But despite of being just twelve years old St. Marina was baptized and told her father about it without any fear. When learning of the daughter to get baptized, the father repudiated her. Marina had to quit rich paternal house and earn her living.

Once when being fifteen Marina shepherded. The ruler of that province (eparch) passing by was fascinated by her beauty and made a proposal of marriage to her. Marina did not conceal her being Christian, and the ruler sent her in charge of a noble woman in the hope that she would persuade the girl to renounce the Christian Faith. But Marina was adamant and disagreed to make a sacrifice to idols not at any price. According to Roman law the girl was then sentenced to various public tortures. St. Marina was flogged, trident planed, pegs hammered in, fire scorched. At the sight of such terrific tortures people wept violently for her. Just in the evening half-dead girl was thrown into dungeon, and by the morning she was healed completely by God`s grace. The wonder did not make tormentors wise, and next day they went on with their deed with fresh power. At first they again scorched Marina and then tried to drown her in a large cauldron. She cried out to the Lord and asked that this mode of torture should become her holy Baptism. All of a sudden the earth shuddered, fetters fell down from the holy girl arms and legs, there suddenly shone extraordinary light, and a snow-white dove appeared bringing a golden crown. Amazed at the site, those present glorified the True God and confessed their faith in Christ. Upon hearing this, the eparch flew into a rage and gave orders to kill anyone who confessed Christ. Over 15,000 Christians perished, and Marina was beheaded.

Her sufferings were described by an eyewitness of the event named Theotimos. Up until the invasion of Constantinople by Western crusaders in 1204, St. Marina’s relics were located in the Panteponteia Monastery. According to other sources, they were located in Antioch until 908 and from there transferred to Italy. They are now in Athens, Greece, in a church dedicated to her. St. Marina’s venerable hand was transferred to Mount Athos and is located in the Batopedi Monastery.