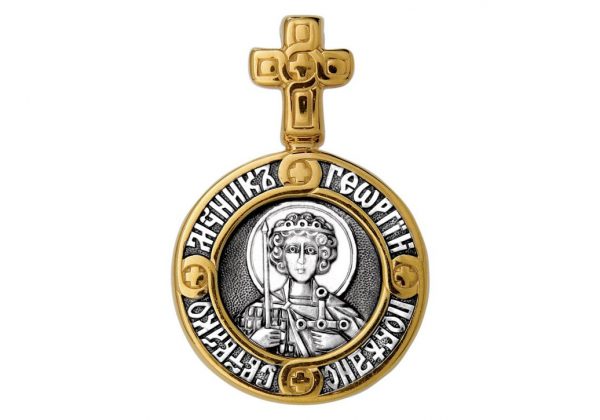 St. George, the Great Martyr († 303 г.) is one of the most beloved saints in Christendom. In Russia he has been venerated since the 11th century. Since 12th century great martyr St. George has been portrayed as serpent champion and named Victorious. The martyr`s name was modified in Russian manner and worshipped as Egoryi, Egor, and Yuri. Ptinces venerated the Saint as a warriors patron, peasants prayed him for their livestock. St. George, the Great Martyr is commemorated thrice a year: on November 16, on December 9, and on May 6. The death day, May 6, is called Yuri’s day and celebrated in a peculiarly grand manner.

The Great Martyr George († 303 г.) was a Roman military leader. In Diocletian times when Christians were prosecuted he declared himself to be a Christian, and was subjected to appalling torture on his own free will. After a next torture a thunderous voice was heard from the heaven: “Don’t be afraid, George, I am with you!”; and an angel appeared before the martyr to heal him.  At that hour два two praetors Anatolius and Protoleon, and Diocletian’s wife queen Alexandra (all three are commemorated on May 6) came to the Gospel. The Saint was again tormented but he did not feel pain, and was miraculously healed of all the wounds. Moreover, in evidence of his belief verity he raised a dead prepared for burial. After that George was imprisoned for a long time. Then the Christians started bribing the guards and going to him with their needs. Once a heathen peasant named Glycerius came. Glycerius glorified Christ and died as a martyr. The wonder of raising the bullock was so the basis of St. George worshipping as a patron of cattle breeding.

Once the Lord Himself appeared in the dungeon before the martyr, crowned him and annunciated of the end of his earthly sufferings. Next day George was decapitated. But the wonders continued. Scores of times he came to aid of those who needed his help. The deliverance the Libyan princess Elizabeth from dragon became the most celebrated posthumous wonder of him.

Near Beirut a dragon made its home in the lake, to envenom all living creatures with its stinking breath. According to idols advice Beirut people decided to sacrifice their children to the monster. It fell to the princess lot to be the first victim. The princess shed bitter tears in expectation of dreadful death. But all of a sudden a young spear on a white steed appeared before her and asked why she was standing here in expectation of perdition. Then the heavenly warrior crossed the dragon ”in the Name of the Father, and of the Son, and of the Holy Spirit”, pricked his lance to its throat, and trampled on it by his steed; but did not kill it. Instead he told the princess to bind the monster and take it to the city for inhabitants together to destroy it.

Since early time the Orthodox Church interprets the miracle in symbolical way. The narration has an intrinsic spiritual sense The Lake and the dragon mean the hell and the devil, the princess symbolizing human soul, and the citizens represent miserable sinners who ruin it voluntarily. That is why the Saint asks the princess: “Why are you standing here and waiting humbly for everlasting punishment and death? Struggle and trust in God!”. The Saint supports us in our struggle with a sin but he does not extirpate it. These are ourselves who should overcome the sin and liberate our souls from it.