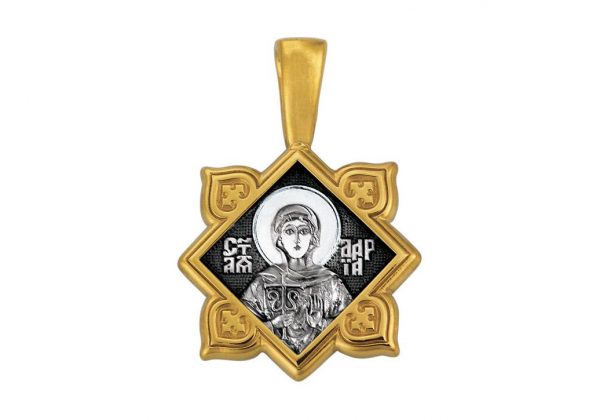 St. Daria was a virgin-priestess in the sanctuary of Pallas Athena. At quite a young age she was married to Chrysanthos who was a Christian being descended from a noble family. According to his relatives plan the youth should have abhore Christianity due to the intellect and beauty of Daria, as well as her devotion to heathenry. However at the wedding night when the spouse remained alone St. Chrysanthos managed to convert his wife to Christ, and the young couple mutually agreed to lead celibate lives. After the death of the father, they turned their house into the place of proclamation of the Gospel. St. Chrysanthos evangelized several young men, and many pious women gathered around St. Daria.

Discontented townsfolk complained to the eparch Celerinus that Sts Chrysanthos and Daria were preaching celibacy and attracting too many young men and women to monasticism. St Chrysanthos was imprisoned and sentenced to public torture. The torments, however, did not shake the bravery of the young martyr, since the power of God clearly aided him. Ox tendons tore like threads; chains fell to pieces; sharp spikes of sticks did not injure. Struck by this, the tribune Claudius himself came to believe in Christ and accepted holy Baptism together with his wife Hilaria, their sons Jason and Maurus, and all his household and soldiers. When news of this mass converting to Christ reached the emperor Numerian (283-284), he commanded them all to be executed. The Martyr Claudius was drowned in the sea, and his sons and soldiers were beheaded, St Hilaria being the only survivor. Christians buried the bodies of the holy martyrs in a nearby cave, and St Hilaria constantly went there to pray. Once, the heathens followed her and led her off for torture. The saint asked that they give her a few moments to pray, and as soon as she finished, she gave up her soul to God. A servant buried the saint in the cave beside her sons.

Then the torturers threw St Chrysanthos into a foul-smelling pit, into which all the filth of the city flowed. But a heavenly light shone on him, and the stench pit was replaced with a sweet fragrance. St Daria was taken to a brothel, but God sent a lion that ran away from the menagerie. The beast came to her room for protecting her. A certain man who tried to defile the saint was immediately knocked to the ground and pinned down by the lion, but the lion did not kill him as if waiting for the order of its master. The saint ordered the youth to be released, and told him about Christ, and set him to the path of salvation. And she started treating every male entering her room with unclean intentions.

Learning of this, the eparch commanded to kindle a blaze and burn the house where Daria and the lion were. Daria blessed the lion to leave calmly for the desert, she remaining in fire unharmed. Then the emperor Numerian ordered Sts Chrysanthus and Daria to be turned over to the executioners. After many cruel tortures, the martyrs were buried alive in the ground. So, in 283 the Holy Martyrs and Wonder Makers gave up their souls to God.

In a cave near the place of the holy spouse execution, Christians began to gather to honor the anniversary of the saints’ martyrdom. They celebrated Church services and partook of the Holy Mysteries. Learning of this, the pagan authorities sealed the entrance to the cave full of worshippers, and those within received the crown of martyrdom. Two of those martyrs are known by name: the Presbyter Diodorus and the Deacon Marianus.

The life story of Sts. Chrysanthos and Daria, Martyrs, was written in 8th century at command of the Pope Stephan II. The saints are commemorated on April 1 (March 19).