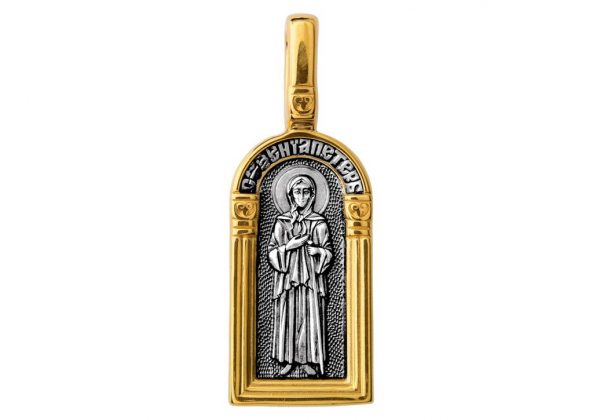 The small breasticon of St. Xenia of Petersburg is shaped traditionally as an icon case. From ancient times that shape was the main element of Orthodox temples. It was repeated by facade blind arches, window and door openings, and arcades. Symbolically it means  a sanctified, God marked place.

St. Xenia was born between 1719 and1730. At the age of only 26 she remained a widow. Her beloved husband, Colonel Andrew Petrov was a court chorister; besides he was an alcoholic. One night this terrible affliction took its toll on him, causing him to drop dead in a drunken state. The shock of losing him and the even greater grief of knowing he died unconfessed shocked St. Xenia, and she decided to beg God’s forgiveness for him by praying and behaving like a “Christ’s fool”. She began giving away all her wealth and property, even the house she lived in, put on her husband’s court-dress coat, and assumed his name, assuring everyone that was it she who had been died, but not he. It wasn’t madness but revelation that spurred her on. Her eyes had been opened to the shallowness of the material world. She wanted nothing more to do with it. Her relatives took her to court, hoping to prove her incompetent and seize control of her wealth. She appeared in court perfectly lucid. The judge ruled in her favor.

Since then St. Xenia had wandered the streets of Saint-Petersburg during 45 years, at first subjected to mockeries and insults. But soon people noticed that the wandering “fool-of-God” has a peculiar God-given force: commerce succeeded in the shops where she took alms; Cabdrivers that gave her a lift had no end of clients; children whom she stroked calmed and recovered. As a result shopkeepers offered her whatever she’d accept; cabdrivers competed to carry her around the city. People sought inviting her home, giving her food and garments, but she did not take that from everybody. She agreed to take only green shirts and red skirts by color resembling worn court-dress coat of her husband. Of money she accepted only copecks that she called “kings astride”, and handed over to somebody straight away.

All days roaming about the dirty, unpaved streets of Petersburg Xenia occasionally called on her acquaintances, ate and conversed with them, and kept on roaming. Nobody knew where she spent nights, and not only people of the district took an interest in it, but the police as well. It appeared that any season in all weathers Xenia went for night to a field, and knelt in prayers till sunrise, making low bows to the winds.

When a new church was being built at the Smolenskoye Cemetery in honor of the Smolensk Icon of the Mother of God, workers began to notice that, during the night, someone would haul mounds of brick to the top of the building where they were needed. The workers were amazed by this and resolved to find out who this tireless worker could be. By posting a watchman they were able to discover that it was the Servant of God, Blessed Xenia.

For great deeds and patience the Lord glorified His chosen one. Xenia was gifted with ability of insight in future and in human hearts, as well as of help in regulating one’s life. She keeps on working these wonders after her death.

Aged 70 Xenia joined her Maker and was committed to the earth. The same year wonders started to be worked near her grave. After a memorial service at her everlasting rest sufferer were healed, peace returned to families, needy received the necessary In 19th century a chapel was built over the saint woman coffin that is until now visited by numerous worshippers.

Commemorated is on February 6 (January 24).