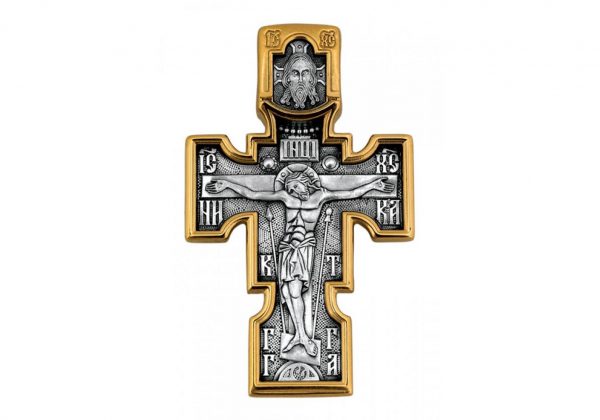 This next-to-skin cross of strict monumental shape absorbed images worshipped most of all for their protecting power.

The image of our Lord Jesus Christ is principal on every cross. All prayers are offered up to Christ who descended to the earth for the sake of our being saved. The Most Holy Mother of God and the saints are God’s assistants in salvation of human beings, and intercessors for them with God. The image of the Lord is pictured twice on the cross obverse. In the center we see the Crucifixion of Christ – the image of His redeeming sacrifice for human sins.   Church calls the cross “the great weapon of Christ”, because having gone through sufferings and death the Lord overcame death and deprived the Devil of his power over the world. Therefore beside the short titles of His Holy name there is written “НИКА”, which means “I overcame”.

Above the Crucifix we see the Vernicle Image of the Saviour. This image has always been the greatest object of worship of the entire Christendom. According to legend it miraculously impressed itself upon a piece of canvas whereby the Lord wiped His face after ablution. In Russia the image was venerated as a spiritual shield against any kind of hostile assault: it was embroidered on colours and standards; placed above fortresses gate, pictured in the crosses top and on guarding lockets.

The upper part of the cross with the Vernicle Image of the Saviour is made in the form of a gonfalon – an ancient form of banner. Gonfalons were carried out during battles for spiritual protecting warriors and helping them. Only the most worshipped saints were portrayed on them. The Kazan icon of the Mother of God and the Archangel Michael can be often seen on gonfalons. Their images are placed to the cross reverse.

The Archangel Michael is the mightiest of the angels. It was he who precipitated the Devil, and headed the angels for struggle against demonic forces.  His name means “Who is like God?” since he is the most powerful and ferocious enemy of any kind of evil. Old Russian princes sought patronage of the Heavenly Commander (Voivode), and often decorated their helmets with a winged figure of him. It was also believed in Russia that the Archangel Michael as an implacable enemy of the Devil protects the souls of the deceased against demonic attacks when seeing them to Heavens. That is why cemeterial churches were often consecrated to Him.

As a banner in the invisible straggle against evil the Kazan icon of the Mother of God is placed above the image of the Archangel Michael. The great wonder making icon was found at site of a fire in Kazan in 1579, and since then had been venerated as Russia protector. Minin and Pozharsky liberated Moscow from Polish invaders with it; Peter I prayed before it on the eve of the Battle of Poltava; M. I. Kutuzov solicited it for benediction before going to war with Napoleon.

The great icon protects spiritually not only our common home – Russia – but every home, every family, every person. That is why the Russians have been appealing to the Kazan wonder making image during several centuries in times of trouble.

Due to its shape and images gathered on it the cross is designed first of all for males. Because it is a male, a husband, and family head who should always take care not only of personal salvation. The Orthodox male is a warrior and protector; a breadwinner and a person to rely on bearing his cross of responsibility for his family and friends. And Our Lord Jesus Christ, the Archangel Michael, and the Most Holy Mother of God in Her Kazan image help him to bear that cross.