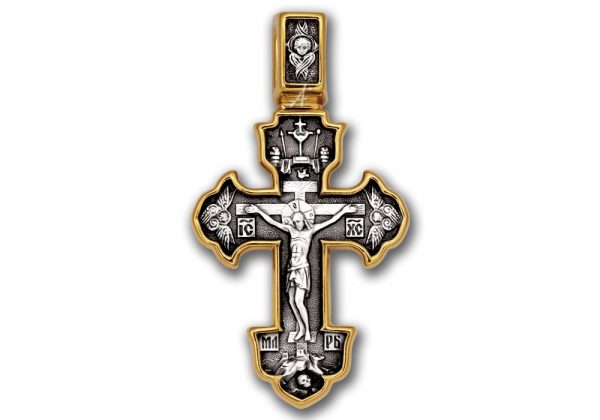 This next to skin cross reminds an anchor by its shape. Such a shaped is based on the words of Apostle Paul that Christians have a possibility “to lay hold of the hope set before us, which we have as an anchor of the soul, a hope both sure and stedfast” (Hebr.6, 18–19). The Cross of Christ saves a human being like an anchor saves a ship in a harbor during storm. Immortal and Omnipotent by His nature, God embodied in Jesus, feeble and subject to diseases and death like all people, and became the Savior for all the mankind. Impeccable, He took sins of the world upon Himself and expiated them through terrible tortures on the cross. From a place of torment and death the Lord transformed Calvary into the source of futurity for people. Therefore the basic point of a next to skin cross is Crucifix – the symbol of His redeeming sacrifice. And at the cross foot we see for letters: МЛРБ – Place of Execution Is Eden.

Above the Cross there is the prepared Throne, or Ethymasia in Greek. That is a symbolical Throne whereto the Lord will sit at the Doomsday for judging the dead and alive at the end of the ages. He got this right for judging by His suffering. That is why the instruments of Christ’s Passions are always included into Ethymasia composition – cross, sponge (a warrior brought a sponge impregnated with water and vinegar to the Savior who was thirsty on the cross), and lance (by which Christ’s breast was pierced).

The Lord, who overcame hell and death turned cross into the great Sign of Christians carrying “invisible struggle” against evil. Guarding Angel on the cross reverse helps a person to overcome inner sin and to act in line with God’s Commandments. The Angel is God granted in christening and takes care of you for all your born days: protects against the devil’s schemes, and tries to guard from sudden death for a person not to die unconfessed to demons joy. After death the Angel guides the soul in the other world. The image of Guarding Angel is put on a next to skin cross for being always remembered, loved and prayed to by a person. As without one’s participation, one’s wish and prayer the Angel is unable to save one. Many saints gifted in seeing spirit world observed on Guarding Angel crying beside a sinner.

Above Angel there is the Vernicle Image of the Saviour. This image is the greatest sacred object of Christendom. By Legend it was miraculously imprinted on a canvas piece with which the Lord wiped His face. The image has always been considered as spiritual shield: it is embroidered on military standards, portrayed on next to skin crosses and guard lockets.