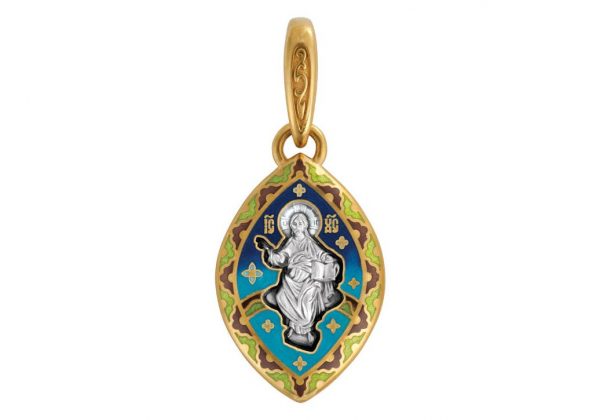 A small icon with the image of the Lord Jesus Christ enthroned (the throne being like the rainbow) is made according to the ancient iconography of the “Vision of Saint John the Divine”: … and behold, there was a throne set in heaven, and upon the throne one sitting; And he that sat was to the sight like the jasper and the sardine stone. And there was a rainbow round about the throne, in sight like unto an emerald. (Rev.4, 3-2). In that vision St. John, the Apostle and Evangelist was given the Revelation of the Last Judgement and of the End of the world (the Apocalypse).

A majestic image of the Redoubtable Judge ruling over the hosts of heaven had always awaked fear and reverence.  But a mediaeval orthodox believer has stayed in awe of future Advent of Christ quite in another manner than a present-day man does: the End of the world has been waited for as a deliverance from evil and injustice. Therefore on the icons and frescoes the Book of life opened by the Lord Who came for the Last Judgement, had always showed inscriptions indicating His merciful love for people: “Come to me, all you that labour, and are burdened, and I will refresh you” (Mt. 11:28); “I am the light of the world” (Jn. 8:12); “For he shall have judgment without mercy, that hath shewed no mercy; and mercy rejoiceth against judgment” (Ja. 2:13); “Judge not according to the appearance, but judge just judgment” (Jn. 7:24)… people believed that in the end of the human history God will descend to earth together with angels for uniting Heaven and earth and starting a new history after separating the sheep from the goats, i.e. kind people from malefactors. The Lord will judge the world not as a strict prosecutor. He will judge through word and light because His judgment means not punishment but saving and changing of the world, its lustration and transformation.

Apocalyptic and eschatological frames of mind having always been a part of people’s piousness in Russia, the images of the Doomsday vision were widely spread.  However, considering the composition intricacy they were seldom depicted on the next-to-skin crosses.  Besides Christ enthroned such pictures should have included four Evangelists’ symbols. Put from four sides of the Lord Almighty those symbols meant completion of world evangelism: God’s equity cannot judge people by evangelic commandments they are known to all the peoples of the world.

Evangelists’ symbols are shown on the reverse of the small icon around the Cross in Blossom being a sign of Lord’s saving sacrifice. Next to them there is doxology: “Glory to Thee, our God, glory to Thee”.