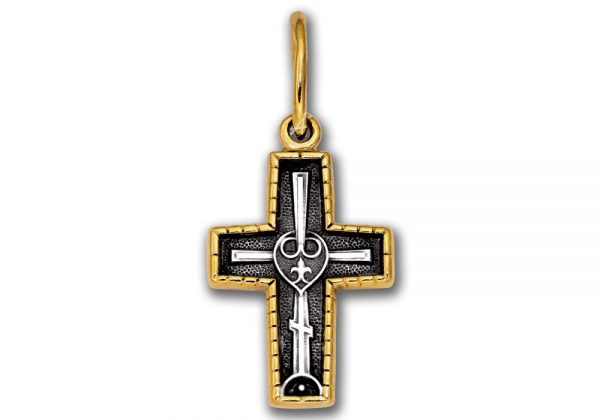 In Orthodoxy there has always existed next to skin crosses both with the Lord image and without it. The cross itself has since the apostolic age been considered the basic sacramental symbol of Christianity. Cross of Lord is glorified by Church as life-giving, since it has been through His death on the Cross and subsequent Resurrection that the Lord triumphed over death and granted futurity to all human beings. The Holy Fathers of the Church wrote much about the symbolism of cross shape. They told that the world consisting of uncoordinated multitudes would have certainly disintegrated but for retention source that they symbolically designated as intersection of cross beams. And it is God, they have said, who is the origin of connection and consolidation. It is He Who prevents this world from crumbling, joins mundane and heavenly lives. Therefore the center of all Orthodox crosses was specially marked, usually by the image of Our Lord Jesus Christ. But since high antiquity it has been a rule to use symbolism. In the cross center here is a special decoration looking like a crescent collar, or pendant (“tsata” in Russian”).

It was traditionally used for decorating icons of Christ and the Most Holy Mother of God, and was suspended by neck. This pendant symbolizes Christ’s royal rank, reminding crown and yoke-necklets, festive precious adornments that Byzantine emperors and Russian put on shoulders on state occasions. Here “tsata” symbolizes also crucifixion thorn put on the head of Christ by tormentors before execution, mocking at Him. Therefore “tsata” is also a sign of Redeemer’s crucifixion thorn.

In the “tsata” center we see three-leaved lily bud. In Christianity lily symbolizes sanctity and intimacy with God.  By legend, it was lily that the archangel Gabriel presented to the Most Holy Mother of God annunciating of Her giving birth to the Savior. In Christian culture lilies are treated in a special way due to the Sermon on the Mount wherein Jesus Christ spoke of them as of the most fine and perfect creations of God.

On the reverse the prayer is written that is mostly put on next to skin crosses, the prayer to our Lord Jesus Christ: “O Lord, save and keep me”.