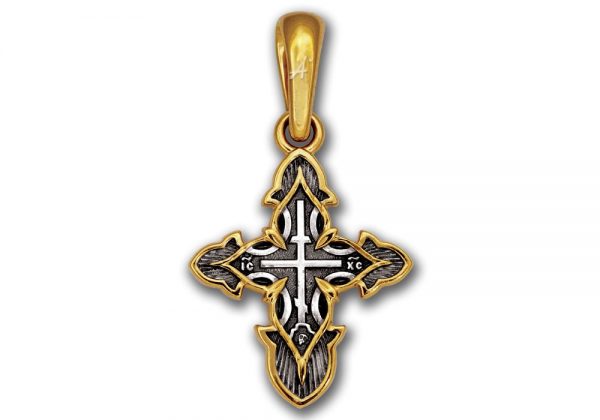 In Orthodoxy there has always existed next to skin crosses both with the Lord image and without it. The cross itself has since the apostolic age been considered the basic sacramental symbol of Christianity. In Orthodoxy an eight-ended cross shown here on the obverse is the most hallowed one. The cross is placed on the layout view of an eminence that symbolizes Calvary, execution yard of Christ. Skull is laid in the Cross base. By Christian legend the Lord was crucified on the place of Adam’s grave. Blood trickled from the cross down to the skull of the first man as if washing off his sins.

The Calvary Cross shape consists of three-leaved lily buds wherewith the crossbars end. In Christianity lily symbolizes purity, sanctity and meekness before God. For its shape such a lily is considered a symbol of Holy Trinity in Christian art. In His messages Christ pointed lilies out as perfectly beautiful flowers. Those were lilies that He cited as an example of people who forgot God in their chase of material wellbeing.  Lilies do not care about their vestments, Christ says, though they are dressed better than king Solomon: it is God who puts these wonderful garments on them. The same is a human being robed in humility, won spiritual purity and love – everything will be given to him by God. Lily is also a symbol of purification by christening. Many researchers of Chrystian symbolism point out that due to its shape lily is symbolically associated with Chrism and is often depicted next to it in ancient ornaments.

Chrism is put in the center of the cross reverse. Chrism is the monogram of Christ’s name made of two Greek letters Х and Р (or I and Х) supplemented with Greek alpha and omega, the first and the last letters of the Greek ABC. The Lord said to the apostles that He is “Alpha and Omega, the beginning and the end”, i.e. He is the Creator of all things, and He will return to the Earth at the end of the world.

Cross is a symbol of belief and devotion to God, a personal sign of the sacrament of baptism when a human being gets the spiritual rebirth. A christened person is adopted by God, is a member of His Church, and lives with hope for salvation and eternal life, since “except a man be born of water and of the Spirit, he cannot enter into the kingdom of God” (Jn. 3, 5). Cross protects the person against any evil and helps to become nearer to God.