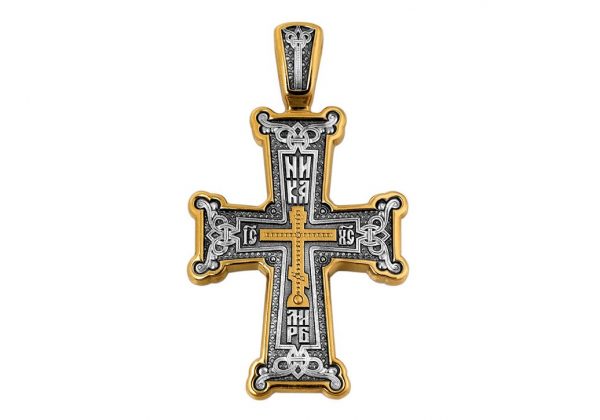 A next-to-skin cross “Calvary” is made as a precious reliquary framing the main sacred object – gold eight-pointed cross put into the center of the item. The cross is as if twice framed: the first symbolic chest involves letters, the second one being a tracery decorated and floriated outer frame. Angular ornament connects the cross obverse and reverse; the latter being completely interwoven ornamented.

It is surrounded with symbolic captions that are the short titles of Christ holy name: “НИКА” meaning “Gained (Gaining) Victory”, and the acronym “МЛРБ” standing for “The Place of a Skull Was the Place of Crucifixion (version: Was Paradise). Eight-pointed cross on semicircular bedding is the image of the Saviour crucifix as well as of His Golgotha.

The word “Golgotha” (calvaria in Latin) in Aramaic means “skull”. Christian theology attributed Calvary to the skull of Adam buried therein according to the Legend. The Calvary cross is the basic Christian symbol. Resplendence of its decoration does not reproduce the historical truth but symbolizes attitude thereto that was formed in the Orthodox Church. Calvary and the Holy Cross of Christ are the most precious treasure than the riches of the entire world.

God is life. Everything and everyone existing on the earth live by virtue of their involvement in God. Formerly Adam and Eve destroyed this connection by their sin. The Divine life stopped flowing in the human being, and he started dying. People erected a barrier between themselves and Gob through the original sin and all subsequent sins. For their salvation, delivering from power of death the connection with the One who is only immortal should have been restored. And since the earth could not rise to heaven, heaven descended to the earth. God became a human being in order to destroy the kingdom of death and to fill id with His Divinity. The cross overcame death on Calvary. The cross of Christ connected the earth and heaven, united God and human being. The cross is a symbol and a weapon of our salvation. And the cross image in Orthodoxy indicates not only sufferings but the Paschal joy as well.